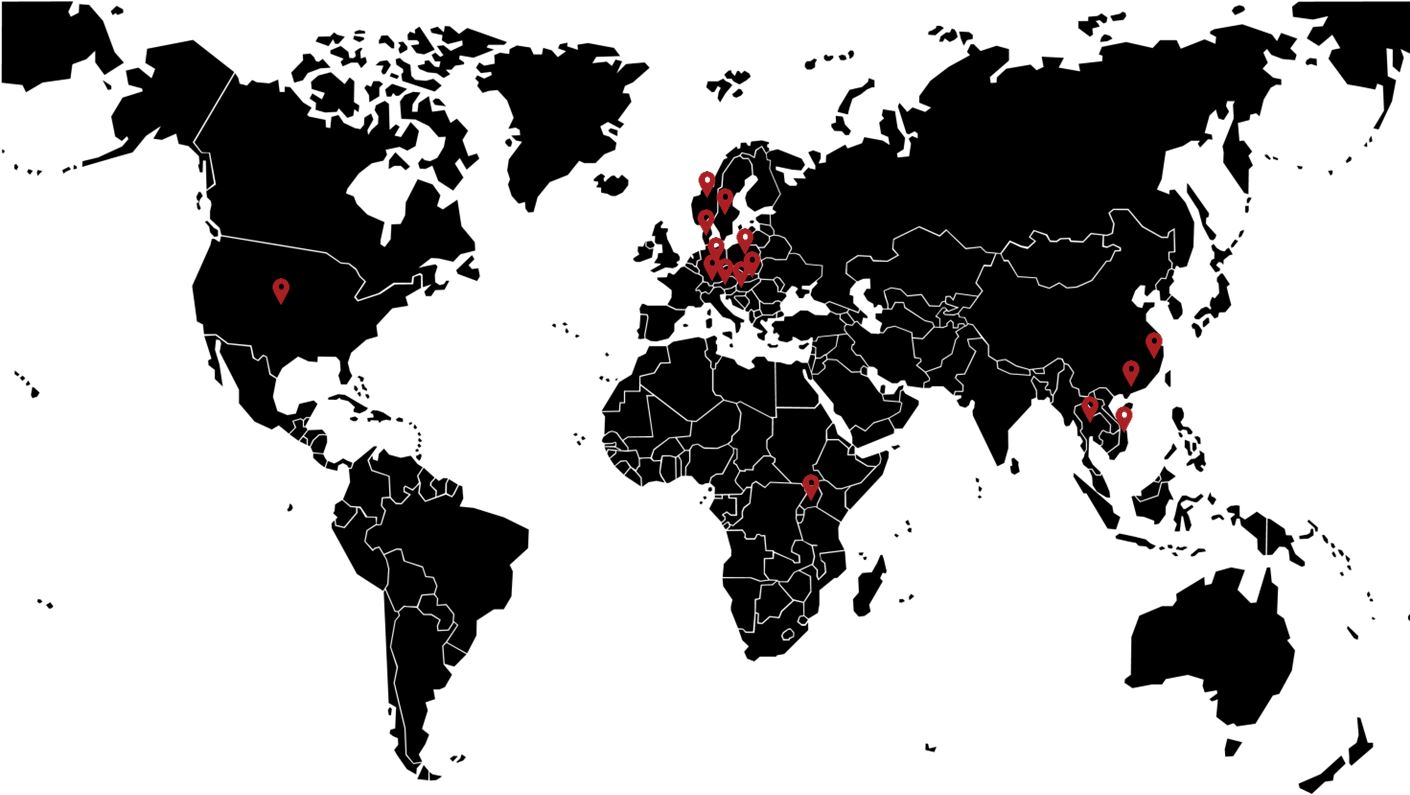 Mekan products is present in 4 continents so far

1979 - 2007 Erik K. Rauff og Erik Sørensen founded in 1979 the maritime electronic company, Shipmate, in Støvring. Shipmate developed and manufactured maritime communication and navigation equipment. Back in the 80s there was, compared to today, even more ”mechatronics” involved in the products, so naturally Shipmate established there own mechanical department which delivered mechanical components, tools and fixtures for the Shipmate production. Shipmate was in the 90s sold to the norwegian maritime company Simrad, later to Kongsberg, and in 2005 to Navico. Navico flagged out all activities in Støvring in 2007.

2008 Mekan develops their first standard PCB fixture called P5032. It was developed together with some of our customers.
2008 Late in 2008 Mekan launched the M4030 standard PCB fixture. This fixture is a manually operated fixture with a unique locking mechanism concept which is still used today. We can only be proud of that concept, since some of our competitors more or less copied this concept…..
2009 The M4030 is replaced by the 4430. The idea behind the 4430 concept is to have a fixture with high number of possible variants on the lowest number of basic parts. And that has been achived.
2010 To be able to deliver low cost test fixtures, the M1218 hinged fixture is designed.
2011 Mekan becomes distributor of contact products from Everett Charles Technologies. An important step for Mekan.
2012 Design and manufacturing of solderwave pallets becomes a new business area.
2014 Mekan presents the first robotic solution for E-14 In Odense.
2015 Mekan starts to focus on design and manufacturing of solder wave pallets
2016 Mekan presents a PCB-gripper for robotic solutions at E-16 In Odense.
2017 The well known M4430 fixture is upgraded with new bottom enclosure
2018 Mekan takes over Prebotech and becomes the leading supplier of solder vawe pallets in Denmark
2019 Mekan buys new cnc-machines, primarely for solder wave pallet manufacturing

Per Milborg Pedersen, Founder and CEO

2002-2007 : Founder of Toolinvent  - design and manufacturing of tools, fixtures etc. for the electronic industry.

Bo has been employeed at the workshop since 1989 and has a enormous experience in tools and fixtures for the electronic industry.

Henning has been employed at the workshop since 1999 and primarily  does all CNC jobs. Henning is also hardcore radio amateur and has a great knowledge in Electronics.

Anders started at Mekan in 2017 and primarily does design/engineering of fixtures, tools etc. Anders is definitely a fast learner in this niche. Anders has a background as AP Graduate in Production Technology.

Martin has been employed at the workshop since 2018 and does various manufacturing of parts at manual and CNC-machines.

Mekan has apx. 500 m2 in the southern end of Business Park Nord. This part of the building has been the mechanical workshop for Simrad since 1985. in 2007, when Mekan took over, the workshop was rearranged  and administration facilities added. Today Mekan has som very nice and bright surroundings that provides a good well-being.

Mekan has a well equiped workshop and a great variety of different materials, mechanical components etc. which contributes to a very short lead time. On top of that Mekan has a great network of subsuppliers with the required flexibility.

We use cookies to ensure that we give you the best experience on our website.I AGREELearn More